The Society was formed in 1908 and performed its first production at the Parish Church Sunday School in November of 1909. ‘Prince and Pedlar’ played to packed houses and received an excellent review from ‘The Clitheroe Times’. In 1914, ‘Iolanthe’ was produced in the Civic Hall, which was then called the Public Hall and is now known as the Grand . . After a break of 9 years, for the First World War, productions resumed at King Lane which was then known as the Co-operative Hall.

Rule Book
In 1936, the Society committee had a dissagreement with the Parochial Church Council which led to the Society breaking away from the Church and forming the Clitheroe Operatic and Dramatic Society. Under this guise, productions continued at King Lane until 1961, after which, the King Lane premises were sold, leaving the Society with nowhere to perform. This was when the Church and the Society re-united to reform the Clitheroe Parish Church Amateur Operatic and Dramatic Society and from then on productions continued at the Parish Church Sunday School until the present day.
A quote from the ‘Borough Record’ of November 15th 1963 when ‘Carousel’ was staged – “After an interval of about 30 years, members of Clitheroe Parish Church Amateur Operatic and Dramatic Society have staged another production, ‘Carousel’ which has attracted large audiences to the church hall this week. In the 1930’s a former Parish church Society became the town’s organisation, but previous to then it had a long run of successes in Gilbert and Sullivan operas dating back to 1909.”

The first programme message from the President and Chairman, Rev. Alan F. Clark reads as follows – “Good evening, ladies and gentlemen, welcome to our first production. Not really our first production of course, for the Clitheroe Parish Church Operatic Society is a very old society indeed: however as many of you are well aware, it has not functioned as such for a long number of years. With this bit of Parish history in mind, and recognizing the great facilities we have in our own wonderful hall and stage; I took it upon myself to revive the Society, and I did so because I felt it would, if handled properly, be of service to the Parish and Clitheroe as a whole. So far as young people are concerned this is an age of jive, twist and shake! Whilst I would not question the right of young people to do such things I feel some of their energy and natural creative ability should from time to time be used for other purposes. The modern American Musical Play affords a good opportunity for them to do just this, as a matter of fact it caters for old and young alike, as you will see, when you look at the cast.”

The following year 1964 the production was ‘Annie get your Gun’ with the following quote from Alan Clark: – “Last year I said that I felt our Society, if handled properly, would be of service to the Parish and Clitheroe as a whole. I am now certain that this is the case.” 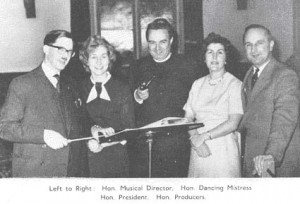